Ai Weiwei: Recapturing the Tragedy and Corruption Surrounding the Sichuan Earthquake | CIRCA 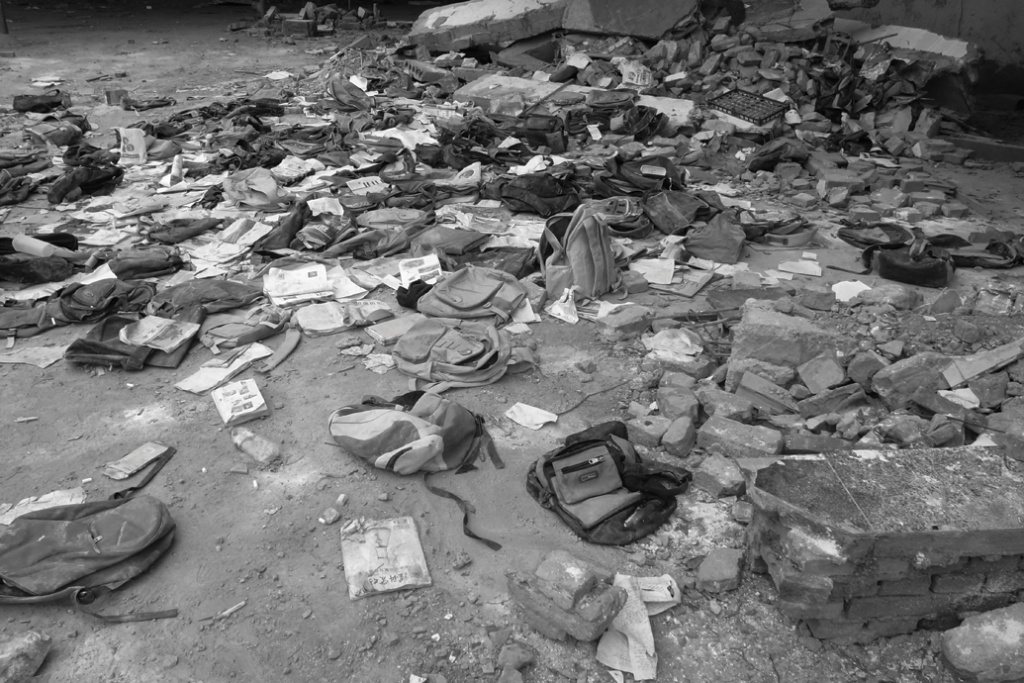 As we enter the last quarter of 2020, a new platform for the creation and exhibition of digital art was launched in the heart of Piccadilly Circus. Known as CIRCA, the platform allows for artists to showcase their work and ideas in the form of a two-minute video on the Piccadilly Lights, one of London’s most famous landmarks.
CIRCA have recently launched a collaborative project titled CIRCA 2020, which sees an artist take over the Piccadilly Lights for an entire month. This month will see artist and activist Ai Weiwei deliver a series of videos documenting his career. On each day of October at 20:20 GMT a video produced by Ai’s studio will be shown to the public both in Piccadilly a Circus and online. The project combines video footage, photography, music, poetry, and art to present a colourful retrospective of Ai’s artistic career. Beginning with Ai’s early days in New York and culminating in his most recent projects, the series promises a deeper insight into his art, life, and relationship with the Chinese government.

The first ten days of the project have already managed to establish the explosivity of his career. Viewers are immersed in Ai’s world from the get-go, whether through the nostalgia of his formative years in New York, his commentaries on the subjective value of tradition (The Coloured Vases series), or the impact of state surveillance on his work.

One of the Key events in Ai’s life and career has been the Sichuan Earthquake of 2008. As the first miniseries within the series, it arguably has a much bigger impact on the viewer by having the ability to go into greater depth in documenting Ai’s involvement and investigation.

Back in 2008, an earthquake hit the Chinese province of Sichuan. Measuring as the eighteenth deadliest earthquake of all time, it badly devastated the area and caused nearly 90,000 casualties in total. Over 5000 of these recorded deaths, however, were children. Due to the poor infrastructure of many buildings in Sichuan, in particular schools, many within the surrounding district collapsed during the earthquake with thousands of students still trapped inside.

The collapse of over 7000 school classrooms encouraged a series of allegations that the government officials and construction companies involved in building these structures were corrupt. Reports emerged discussing the negligence of these bodies, in particular their disregard of civil engineering standards. It was also suggested that the local government had taken shortcuts in building to save and pocket money for themselves.

The reports culminated in protests from grieving parents, which continued despite local governments’ alleged attempts to pay off their silence. The protests led to a pledge from the Chinese federal government that they would follow up the investigation, but nothing substantial was set in motion and international media continued to condemn their response.

The three videos shown in Piccadilly Circus on the 5th, 6th, and 7th of October aim to show viewers what happened in stages. Using first-hand footage of the earthquake and the clean-up efforts, SICHUAN EARTHQUAKE lays out a brief overview of what happened from the point of view of the people in Sichuan. STUDENTS’ NAMES builds upon the tragedy of the event, following Ai’s investigation into uncovering the names of all the students who lost their lives. The mini-series is rounded off with SO SORRY, which documents the artist’s trip to Sichuan to testify in court on behalf of fellow activist and investigator, Tan Zuoren. This final video solidifies the distrust in the Chinese government’s actions by highlighting acts of police brutality, specifically how officers broke into Ai’s hotel room on the eve of the trial and assaulted him.

The videos bring together a narrative of the events from the perspective of the artist, tackling the sensitive topic through a combination of documentary footage, art, and social criticisms.

SICHUAN EARTHQUAKE starts the mini-series with an emotional and dramatic retelling of the events of the earthquake. With the first segment filmed in black and white, the artist highlights the severity of the situation and instils a growing sense of horror as the chaos continues. The use of black and white gives the footage a much older feel; the earthquake only happened in 2008, yet the footage shown to us makes it seem decades older. This choice of colour perhaps reflects a commentary on the fact that events such as this have been relegated to the past by both media outlets and the Chinese government, the latter of whom left the event without further investigation. These scenes are later juxtaposed by colour footage of recovery efforts and newly-built graves, proving a contrasting message to the black and white images of physical destruction: those affected have not forgotten, and their journey to rebuilding their community is still ongoing.

The video ends with a look into Ai’s installation piece ‘Straight’, which is made up of ninety tonnes of steel reinforcing rods. Recovered after the earthquake and straightened out by hand, these steel rods have been laid out in broken undulations to represent the geological fault lines that can be produced by earthquakes. The artwork provides the final and lasting image of the video and a physical reminder that a small structural fault had devastating widespread consequences.

STUDENTS’ NAMES follows the tragedy of the previous video by compiling Ai’s investigative efforts into a long list of names. Each name represents a student who was killed during the earthquake, making up a moving list that lasts for over half of the video. The sheer number of names listed on a black screen puts into perspective the scale of the tragedy, creating an unsettling experience for the viewer as they gradually realise what the names represent and just how many there are.

This realisation comes in the last twenty seconds of the video, as the names come together to make up footage of a child being carried away from the rubble for emergency attention. The image of their limp body combined with the names onscreen solidifies that the work isn’t about a list of names, but the children who were victims of a corrupt government.

SO SORRY highlights this sense of corruption by collating several clips from one of Ai’s documentaries (also titled ‘So Sorry’) to emphasise the brutality and violence of the current surveillance state. The video outlines several events following the earthquake, but what stands out most is the trial, Ai’s altercation with police officers, and his subsequent hospitalisation and surgery. One of the main events, Ai’s surgery, is shot with all the drama of a hospital soap opera despite the very real outline of what has happened; highlighting how Ai became a victim of state violence.

The harm inflicted on the artist, as a means of trying to enforce silence, places less focus on the tragedy of the earthquake. Instead, viewers are given the opportunity to identify with Ai’s plight. As such, CIRCA arguably fulfils its purpose in connecting artist and audience, as people become more connected to the person behind the artistic material. Rather than just be aware of an artwork or video, people can get to know Ai directly through his experiences and how he looks back on them. Through the artist’s lens, the narrative of these incidents opens the stage for greater criticism of the Chinese government’s handling of so-called ‘dissidents’, and invites audiences to engage with these ideas.

The video has an abrupt end, with the artist’s camera being directed to the floor and quickly shut off by an officer. As Ai scuffles with the man to hold onto his camera, the words ‘THEY HAVE TO HAVE AN ENEMY’ play on the screen in bold letters. The statement provides a commentary on the way that the Chinese government seem to make enemies out of anyone for the sake of maintaining a sense of control. By making criminals out of victims and those who speak out, they instil a power dynamic which clearly states that the reputation of the state must remain immaculate and rebels must be silenced. Consequently, this final scene showcases the act of stamping out dissidence and emphasises the violent reaction to an investigation meant to bring closure to bereaved families.

The videos showcased so far in the CIRCA 2020 x Ai Weiwei event have provided an energizing start to the project, leaving the art world waiting excitedly for the next daily instalment. The mini-series surrounding the Sichuan earthquake is successful in bringing the viewer back to that moment in time, regardless of whether they lived through it in China or heard about it on the news. Providing a reminder of the injustice, frustrations, unanswered questions, and the tragedy that occurred, the videos help to submerse viewers in the narrative and encourage them to start conversations. By being critical of how the government handled the situation, Ai draws attention to reoccurring issues of power, surveillance, and corruption. A hefty achievement, considering we’re only ten videos in.

Charlie Colville is the current Arts Editor for Mouthing Off magazine, an online platform  designed to give young people the opportunity to find a new voice – a guttural scream loud enough to arouse fresh ideas, creative thought, and inspire artistic flair.

Douglas Gordon: How Why & What We Remember

David Hockney: Let The Sunshine In

Vivienne Westwood: “I have a plan 2 save the world”

James Barnor: Ever Young, Ever Endearing

Emma Talbot: Searching for the Future

Cauleen Smith and the Journey to a Better Future

Ai Weiwei: Coronavirus vs The Rest of the World

Ai Weiwei: Investigating the Human Cost of the Refugee Crisis

Ai Weiwei’s Hope in The Jaws Of The Monster